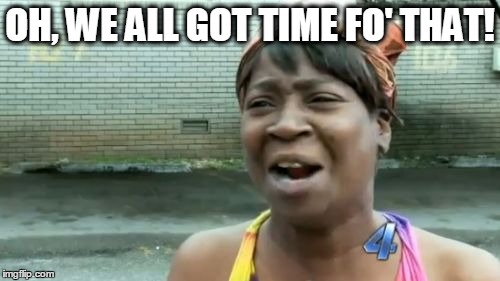 I Aint Got Time for That

Has thinking become a superfluous exercise without any reality?

This question is not referencing ‘intellectual’ thought, but all thought in general. Even the mundane thoughts concerning work or family life.

How much do people really think in order to act? ‘I Aint Got Time for That’

Consider how much action one does using pre-determined sociological conditions. The mechanization of work is a great example of dissociation. Those who do the thinking set the norms, establish schedules, and never act. Those who act must do so according to the rules. No reflection on their actions is required.

How much of your brain is automated?

Muscle memory is when you train your muscles to do a specific task. Your brain is the biggest muscle of all.

Much of our daily lives are taken up by habits that we’ve formed over our lifetime. An important characteristic of a habit is that it’s automatic– we don’t always recognize habits in our own behavior.

One of the most serious dissociation’s that propaganda causes is the devaluation of thought. Words and language are transformed into a ‘sound byte’, a symbol that directly evokes emotions and reflexes.

What is real political debate really about anyways?

Anything that causes anxiety in the public mind is useful for the propagandist. Political debates really are of little concern if they’re only about maintaining the order of the infrastructure. Boring!

Remember that propaganda seeks to induce action, adherence, and participation.

Mithridatization is the process of gradually increasing doses of poison so that an individual can be desensitized. One can become insensitive to propaganda in this way.

An individual in this state has become indifferent to general themes. But, the individual will still watch the tube, buy the newspaper, and follow the rules. All the symbols have been assimilated in the process of mithridatization. These individuals no longer need to read a propaganda poster; a splash of color is all that is needed to awaken the reflex.

Vitriol causes both Mithridatization and Sensibilization

Issues that flame desire with heated emotion always provide a ready made system with fuel.

Click below for Part 1 of our series about propaganda….

Groupthink as a System of the Decision Making Process

In 1972, Irving Janis, a research psychologist, coined the term “groupthink” to refer to a phenomenon that occurs when members of a group prioritize unanimity over a realistic appraisal of the situation at hand. Since then, this theory has been frequently applied to other poor group decisions, including political incidents like the Bay of Pigs and scientific mistakes like the Challenger (Aldag & Fuller, 1993; Hogg & Hain, 2000). In modern society, a majority of decisions are highly dependent on groups. Small-scale groups such as sports teams, families, and even students enrolled in the same class make decisions on a daily basis. Furthermore, large-scale and high-stakes groups such as the United States Senate, jury panels, Boards of Directors, and the United Nations are all examples of groups in charge of decisions that have widespread consequences. These psychological concepts such as groupthink have consistently been applied to the realm of politics in attempts to understand the trends of large-scale social movements (Walker, 2002). The danger of groupthink is pervasive in these contexts, where the prioritization of solidarity and disregard for personal opinions could result in poor decisions detrimental for the group’s members and non-members.