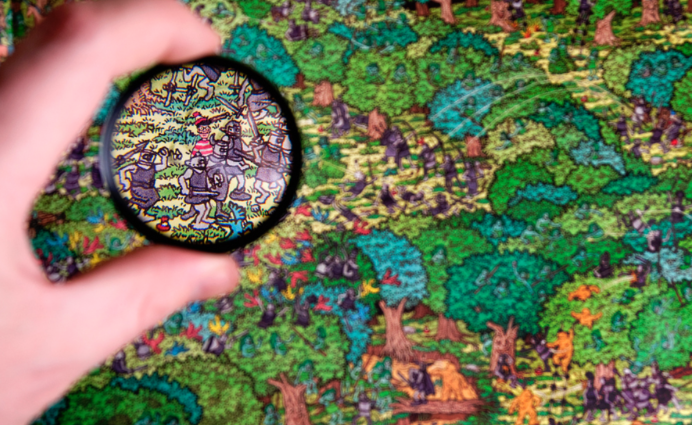 Visual montage perception in advertising might prove to be interesting.

With that in mind, we’ll start with the classics…

Kuleshov demonstrated the necessity of considering montage as the basic tool of cinema art. In Kuleshov’s view, the cinema consists of fragments and the assembly of those fragments, the assembly of elements which in reality are distinct. It is therefore not the content of the images in a film which is important, but their combination. The raw materials of such an art work need not be original, but are pre-fabricated elements which can be disassembled and re-assembled by the artist into new juxtapositions.

This movie documents a classic experiment conducted in 1950 by Ivo Kohler and Theodor Erismann at the university of Innsbruck, Austria. Erismann is the older person the movie, and Kohler, his research assistant at that time, is the person wearing the inversion goggles.

Basically, all the eyes do is process and focus light. Our Visual Montage Perception can process shape, tone, and color. Our eyes can bend light accordingly. This power of accommodation also allows our eyes to relax or tense up using its muscles to determine distance. Our muscles curve when viewing object closely and they flatten when seen from a distance. When we focus on a closeup of an object our eyes can tire quickly.

Keeping everything around you in focus. Close up geometrical patters can cause the eyes to lose focus and the mind can wander. It’s possible to lose focus in what you’re seeing as well as what you’re thinking when ‘seeing’ an object up close. Stepping back allows the eyes to flatten so the full spectrum of distance can be appreciated.

Human beings have binocular vision. Allowing us to see two of everything. Our brain combines these two images into one so we can process what we see. Try staring at your hand with one eye and then the other. Each has a different perceptive vision.

Stereoscopy – Creating an illusion of depth

3D glasses can create this effect using two images for each eyeball to focus on.

Our brains are the main muscle processing our vision.

Now lets follow our vision from sensation to perception. The mechanics of our eyeball turns everything we see upside down. Our brain then takes the impulses from the optic nerve to the primary visual cortex. Does our brain actually reflip the image? No. Our brain registers the image as right side up automatically. Our brains know when something doesn’t match and takes action accordingly to make things right. The video of Erismann and Kohler from above illustrates this point quite well. Sometimes it takes a bit of time for the brain to sort out the confusion.

The Brain has an amazing capacity for selecting, organizing, and interpreting information. First it identifies the basic shape and form and then it assigns meaning to each. Three parts of our brain contribute to this.

The Ventral Stream or System: Recognizes what something is and allows us to name it.
The Dorsal Stream: Locates the object in physical space.
The Limbic System: Assigns an emotional response to it.

The Gestalt laws of perceptual organization in Visual Montage Perception.

These are the principals of Gestalt Psychology. Shape, form, or whole. Our minds create our experiences from a wide range of perceptions. Each piece of whole is unique and contributes to the overall function. Each part is an independent whole as the whole is independent from its parts. We are more than just the sum of all our compliments.

Figure-ground – The relationship between the object and its background or the spaces in between. The Mass and the Void. What are the negative shapes around the form? To understand the figure one must understand the ground. These can be seen as separate but our brains perceive them both to give meaning to our sight. Each is defined by the existence of the other. They can be separated after the fact but they always compliment one another. The perception itself is an integrated whole.

This can allow for optical reasoning to become distorted from time to time. What is the object, what is the background?

Without the color contrast we couldn’t identify neither the object nor the background. What if there was no contrast? There would be no identity at that point. Sensation without perception. This is where camouflage comes into play.

Closure – The mind wants to fill in the gaps when it notices pieces missing.

Even when some lines are missing our brains will fill in the (w)hole.

Continuance – We always to try to follow the lines and curves to make perceptive sense of what we’re seeing.

Our eyes will follow the horizon right off the map or out of the frame of an image.

Common fate – Two or more things moving in the same direction as one unit.

Similarity – Similar to common fate but it uses forms, colors, patterns, etc. instead of motion and direction.

Proximity – Things that are close to one another are part of one group.

This has nothing to do with common fate or similarity. The thought process will just take random objects together and group them accordingly.

When motion pictures and cinematography came along new avenues for psychological expression became available. Cutting and splicing film together to tell a story without dialog took much thought and experiments to perfect. A new form of attaching meaning to images presented to an audience began to took shape: The Montage of Visual Montage Perception.

Lev Kuleshov was the first to experiment in this technique using juxtaposition to form his examples. It involves assembling specific shots and connecting an emotion to it.

Basically, an actor doesn’t need to do anything. The film maker will use and expression on a face and then cut to another image to express a specific meaning. 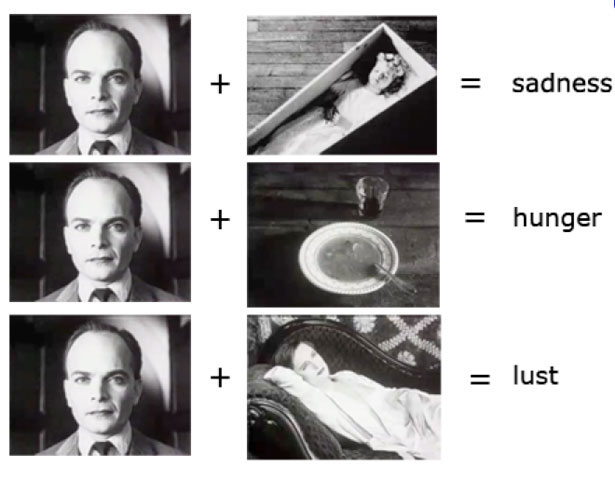 The first and most basic is metric editing, based on the length of a shot. It creates the tempo of the film.

The second editing method is rhythmic montage, based on both the length of a shot and the dynamics of the scenes. In other words, it also considers the rhythm of the action depicted.

Next is the tonal editing method, which focuses on the lighting, shadows, and colors of the edited scenes.

The over-tonal method combines the first three method in a holistic approach.

The last and most complex editing method, and Eisenstein’s favorite, is the intellectual method. It creates new meaning through editing by combining shots on the basis of a conceptual connection between them.

Building on the works of D.W. Griffith and the development of “continuity editing” in early film history, Soviet silent filmmakers would pioneer new innovative ideas about editing that moved film from an extension of theater into a mature and powerful artistic medium.

Going through the history of these magic light effects helps to understand where psychological priming comes from. Especially using imagery to create emotion into an audience. Today, the internet is able to encourage these Visual Montage Perception effects with greater influence and ability.